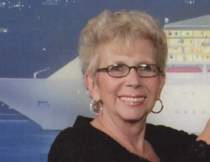 Sue Ann (Heistand) Napier, age 74, of St. Petersburg FL, formerly of Germantown OH, passed away March 24, 2017.  She was born August 3, 1942, the daughter of Kenneth and Mary Elizabeth (Paine) Heistand. A 1960 graduate of Germantown High School, Sue Ann held bachelors and masters degrees in education from Miami University. She taught kindergarten at Germantown Elementary prior to moving with her husband Alvin to Florida in 1985. While there, she and Alvin sold health insurance for many years.

Sue Ann was a member of Maximo Presbyterian Church in St. Petersburg and a former member of Wesley United Methodist Church in Germantown, singing in the choir at both churches. She was formerly the Secretary of the Germantown Alumni Association for many years. She and Alvin loved traveling and especially enjoyed 158 cruises together, often sailing with family and friends.

Sue Ann was preceded in death by her father (1998), mother (2010) and brother Paul (2003). She is survived by her husband of 55 years Alvin; son Alan (Sheree) of Bradenton FL; granddaughters Melissa, Heather and Alana and seven great-grandchildren, all in Florida; sister-in-law Barbara Heistand of Sevierville TN and niece Ann in Florida; brother Mark (Karen Carmickle) and nephews William (Taylor) and Charles, all of Germantown.

Burial was held at Germantown Union Cemetery. The family will receive friends from 3 pm to 4 pm on Saturday, April 29, 2017 at Germantown United Methodist Church, 525 Farmersville Pike, followed by a memorial service at 4 pm led by Pastor Gary Wheeler.

To order memorial trees or send flowers to the family in memory of Sue Ann (Heistand) Napier, please visit our flower store.