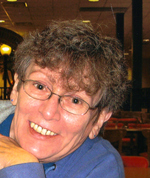 
Sharon Marie Martin Covert,  age 63 of Union, OH, originally from Farmersville, OH, passed away on Wednesday, January 10, 2013.  She was preceded in death by two of her three children, Lisa Marie Martin and Freddie Joe Covert Jr, who both passed away in January of 2001.  She leaves to mourn her passing her remaining daughter, Lacy Martin of Columbus; her sister, Judy (Donnie) Blair of Union; her dog, Smokey; and her granddog, Shelby; as well as many other family members and friends.  She was a loving mother, dear sister, and friend to many and she will be missed greatly by all who loved her.  She was a very strong woman, and was very caring and generous. She loved to read, sew, and cook.  Sharon was a graduate of Dixie High School and a former long term employee with Monarch Marking/Paxar. The family will receive friends from 5-8PM on Thursday, January 17, 2013 at Arpp & Root Funeral Home Germantown. Graveside services will be held Friday, January 18, 2013 at   3P.M. at Holp Cemetery, Farmersville. In lieu of flowers, the family is requesting donations for funeral expenses.  Any donations would be greatly appreciated and can be made directly to the funeral home.

To order memorial trees or send flowers to the family in memory of Sharon Covert, please visit our flower store.