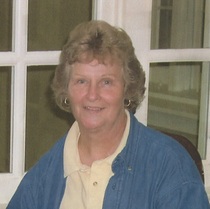 Macy, Marjorie E. (Blankenship), 78, of Germantown, passed away Saturday, April 29, 2017 after a short illness. She was born in Dayton on September 24, 1938, to the late Paul E. Blankenship and Ialo A. (Strader) Shope and lived in Germantown her entire life.  She was an Accounting specialist with the LM Berry Company when she retired in 2001.
Along with her parents, Marjorie was also preceded in death by her husband Donald Macy, step-father Arthur Shope, sister Betty (Lakes) Lamb, brother Gene (Gladys) Blankenship, and son-in-law Wayne Williams.

In early life Marjorie enjoyed camping, boating and traveling.  She and Don were members of the Gold Wing Road Riders Association and Chapter J for many years, and travelled by motorcycle throughout the United States and Nova Scotia with their Goldwing friends. She was a member of the Purple Peddler Ladies Tricycle Drill Team and performed in the Macy’s Thanksgiving Day parade in 2009.  Marjorie also enjoyed taking bus trips with her daughter and the “Travel With Us” group from Middletown.

Marjorie was a 37 year member of the Order of the Eastern Star. She was a three time Past Matron at Germantown Chapter #431, Grand Representative of North Dakota in Ohio (1995), past Grand Paige (2013), past president and current secretary of district 19 Past Matrons, chairman for the chairman of arrangements office for the Grand Chapter of Ohio for the past 10 years, and current treasurer for Farmersville Chapter #155.

Marjorie is survived by her daughter Kimberly (Macy) Williams, brother Marvin Blankenship, brother-in-law Jim (Aneliese) Lamb, many special nieces, nephews and cousins, and many beloved friends and Star sisters and brothers.  She will be sadly missed by those whose lives she has touched, especially her loving daughter who she shared a special bond with.

Funeral services will be held Thursday May 4, 2017 at 10:30am at the Arpp & Root Funeral Home, 29 N Main St in downtown historic Germantown with interment immediately following at Germantown Union Cemetery.  The family will receive friends on Wednesday from 6-8 PM at the funeral home with Order of the Eastern Star services beginning at 7:30PM.

Charity of your choice

To order memorial trees or send flowers to the family in memory of Marjorie Macy, please visit our flower store.