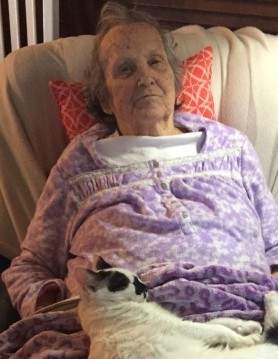 Dils, Marilyn, age 85 of Miamisburg passed away Friday December 1st, 2017 at Hospice of Butler & Warren Counties. She was born in Index, Kentucky to the late Isaac and Ethel (Brown) Manning. Marilyn was a member of the US Coast Guard Auxiliary, she enjoyed crocheting, puzzle books, reading, baking and cooking. Marilyn loved her family and was active in helping raise her children and grandchildren. Along with her parents she was preceded in death by her husband Elmer Dils in 1984, her sister Enith Long, and her 2 brothers Glen and Eddie Manning. She is survived by her children Leslie Adkins, Robert (Linda) Dils, Charles (Jean) Baker, Debra (John) Redman, Deana Garrett, Linda Dils, Karolynn (Todd) Swanson, and Diana (Bernard) Elie, 19 grandchildren and numerous great grandchildren and extended family. The family will receive friends on Thursday, December 7th from 10-11am at the Arpp & Root Funeral Home, 29 N Main St. Germantown. Immediately following the visitation there will be a processional and graveside service at Germantown Union Cemetery.

To order memorial trees or send flowers to the family in memory of Marilyn Dils, please visit our flower store.