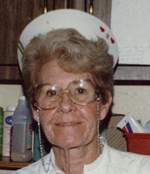 Louise A. Riner,  age 83, of Germantown passed away Friday December 14, 2012 at Hospice of Dayton. Louise was born in Wurtland, Kentucky the daughter of the late Hezekiah and Lillie (Gearhart)) Matthews. Louise owned and operated a beauty salon in Germantown before moving to Morristown TN. She was a L.P.N. for 20 years in Morristown before moving back to Germantown. In later years she babysat for her great great nieces Lilly and Harper Keister. In addition to her parents, she was preceded in death by her husband Frank (Red) Riner, brothers Jessie Matthews and Elwood Matthews, sister Nellie Lawson. She is survived by a niece with whom she lived, Gretchen (David) Coffey: brothers Clifford Matthews, and Tracy Matthews, sister Marie Berry; and numerous nieces and nephews. Funeral services will be held Wednesday December 19, 2012 at 12:00 p.m. (noon) at the Arpp & Root Funeral Home, Germantown. Pastor James A. Setser officiating. Burial will be in Germantown Union Cemetery. Visitation will be 10:00 a.m. -12:00 p.m. Wednesday (2 hrs. prior to service) at the funeral home. In lieu of flowers donations may be made to Abundant Life Tabernacle. Online condolences may be sent to www.arpprootfh.com

To order memorial trees or send flowers to the family in memory of Louise Riner, please visit our flower store.