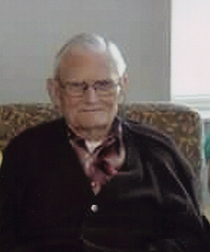 DeGroat, Lester L., age 94 of Farmersville, OH passed away June 29, 2016.  He was born to the late Robert and Edna (Crout) DeGroat in Middletown, OH.  Lester retired from Koenig Equipment in Germantown and worked hard as a farmer throughout his life.  Along with his parents, Lester was preceded in death by his first wife Eileen, his second wife Veda, and his daughter Patricia Rich.  He is survived by his son Rick (Donna) DeGroat, 6 step-sons Don, Roger, Bob, Randy, Tom, and Chris Fogle, his brother Bill (Wanda) DeGroat, 2 grandchildren Duane (Ashley) and Brian (Nichole), and 3 great grandchildren Aubree, Adelynn, and Riley.  Funeral Services will be Saturday, July 2, 2016 at 10:00am at the Arpp & Root Funeral Home, 29 N Main Street in downtown historic Germantown with interment immediately following at Highland Cemetery in Miamisburg.  The family will receive friends on Friday, July 1 from 5-8 PM at the Funeral Home.  In lieu of flowers, contributions can be made to Farmersville Fire and Rescue.

To order memorial trees or send flowers to the family in memory of Lester DeGroat, please visit our flower store.