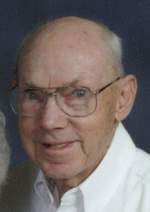 Leslie B. Hosler, of Germantown, Ohio formerly of Bethel Township, Ohio passed away on November 4, 2011. He was born on November 19, 1921 in Sabina, Ohio to Earl and Viva (Lauderman) Hosier. He graduated from Washington Court House High School in 1939.     He went on to complete an Auto Mechanic Program after graduation. Leslie served four years in the Army Air Corps during WWII as a Communications Operator. He married Freda L. Metzger of Canton, Ohio in 1946. He retired from Ohio Bell Telephone after 34 years of service and also enjoyed part time farming. He was preceded in death by his parents, his sister and brother-in-law, Marvin and Louise (Hosler) Landman.  He is survived by two sons, Kenneth L. and Karen (McPeck) Hosler of Arcanum, Ohio and Gene L. and Susie (Clark) Hosler of Germantown, Ohio. He was also survived by 7 grandchildren, and their spouses, also 9 great grandchildren. He was a member of Brandt Lutheran Church and Associate member of Emmanuel Lutheran Church of Germantown. He will be remembered at a Memorial Service at the Brandt Lutheran Church in Brandt, Ohio on November 19th at 11:00 am. There will also be a Memorial Service at the Emmanuel Lutheran Church in Germantown on November 20th at 4:00 pm.  Donations may be made to Hospice of Dayton, 324 Wilmington Avenue, Dayton, OH 45420. Also Brandt Evangelical Lutheran Church, 6870 U.S. Rt 40, Tipp City, OH 45372, or Emmanuel Evangelical Lutheran Church, 30 W. Warren St., Germantown, OH 45327. Arrangements by Arpp & Root Funeral Home Germantown Online condolences may be sent to the family at www.arpprootfh.com.

To order memorial trees or send flowers to the family in memory of Leslie Hosler, please visit our flower store.