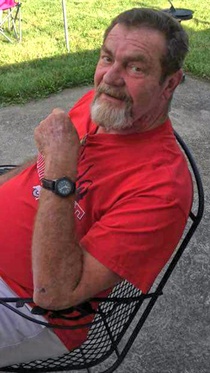 Poff, Kenneth, age 70 of Germantown passed away May 15, 2017 at the Atrium Medical Center.  He was born in Kentucky on August 11, 1946 to the late Chester and Stella (Johnson) Poff, graduated from Middletown High School, and retired from AK Steel.  Along with his parents he was preceded in death by his first wife Susan Poff, and his grandson Zachary “Minne” Gekeler.  He is survived by his wife Ralf (Warner) Poff, his son Steve (Holly) Poff, daughters Amy (Chris) Schenck, Ginger (Tim) McLelland , Melissa Phelps, Andrea (Terry) Gekeler,  Carman (Randy) Jones and Chuck (Malinda) Pilkington.  His grandchildren Steven (Sydney) Schenck, Jordan, David, Samuel, and Patience Schenck, Connor, Caleb, and Katie Poff, Josh, Anna, and Joey McLelland, Tyler and Brooklyn Murphy, Logan (Seth) Carpenter, Kayla, Alyssa, Miranda Jones, and Stevie Pilkington, and great grandchildren Mabel Schenck and Rylee Pilkington.  Funeral Services will be held on Friday, May 19, 2017 at 11:00am at Germantown United Methodist Church, 525 Farmersville Pike, Germantown, OH with Pastor Gary Wheeler officiating.  The family will receive friends on Thursday, May 20, 2017 from 5-7PM at the church.  Kenny loved his family and had a special place in his heart for his grandkids and great grandkids.  In memory of that love, the family requests in lieu of flowers that donations be made to the Band of Brothers that serves in memory of his grandson Minne Gekeler.  Donations can be mailed to 53 Pelfrey St. Germantown, OH  45327 in memory of Kenny, envelopes will also be provided at the service.

To order memorial trees or send flowers to the family in memory of Kenneth Poff, please visit our flower store.