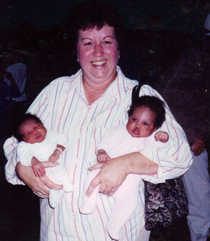 Janet K  Vicroy(Barton) age 70 of Germantown, passed away Sunday at Hospice of Dayton. Janet was born in Dayton, OH the daughter of the late Cletus(Cook) and Herbert Barton. She graduated from Germantown High School in 1961. She retired from General Motors and was a foster parent for 20 years caring for over 70 newborn babies until they were adopted. She was a member of Germantown Church of the Nazarene where she served as secretary and president of the Germantown Alumni Association. In addition to her parents she was preceded in death by her husband Donald Lee Vicroy, in 2000, mother in law Zola Vicroy; brother Jerry Barton, sister Joan Barton, nephews Doug Riley and Brad Holland. She is survived by son Barry Vicroy, daughters  Loreesa  Barton, Amanda (Adam) Naylor, Julisa Vicroy, Jennie (Alex) Baker, Tasha Vicroy and foster daughter Katie (Tom) Hester; grandchildren Tony, Heather and Timothy Vicroy and Koby Naylor, 6 great grandchildren, brother Jeff Barton and Lisa Stevens, sisters Jayne (Bill) Riley, Jennifer (Dale) Rickert and Joyce(Randy) Ney, brother in law, Roger (Nancy) Vicroy, sister in law Velia Barton. Funeral services will be held 10:30 a.m. Friday December 27, 2013 at the Arpp & Root Funeral Home. Pastor Craig Henderson officiating. Burial will follow at Bellbrook Cemetery. The family will receive friends Thursday 5:00 p.m.- 8:00 p.m. at the funeral home. If desired memorial contributions maybe made to Dodds Monument for the purchase of a headstone. (Envelops will be provided.) Online condolences may be sent to the family at www.arpprootfh.com

To order memorial trees or send flowers to the family in memory of Janet Vicroy, please visit our flower store.