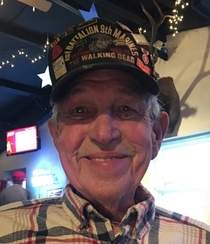 Cottongim, James E. “Cotton”, age 72, of Middletown, OH passed away January 31, 2017 at his home surrounded by family.  He was born April 26, 1944 to the late Chester A. and Jessie K. (Allen) Cottongim, Sr.  He was a loving husband, father, grandfather, and brother.   He served in the Vietnam War from 1966-67, was a member of the 1st Battalion 9th Marines the “Walking Dead”, and was awarded the Purple Heart.  He retired in 2000 from Delco Moraine, division of GM after 32 years, and was a lifelong resident of Madison Township.  Cotton faithfully served his community as a special deputy for Butler County Sheriff Department for 8 years, was a volunteer fireman for Madison Township for 40 years and served as Fire Chief twice.  He was also the chief for the first Madison Township Life Squad and coached many years at the Madison Sports Club. He is survived by his wife Janet Zehring Cottongim; two daughters, Missy Cottongim of West Chester, OH and Jill (Jay) Howard of Germantown, Ohio; three grandchildren Jim (Amy) Bolen,  Julia Howard, and Jayden Howard; two brothers Chester A. Cottongim Jr. and Norman (Phyllis) Cottongim; sister in-laws Jane (Rife) Denlinger and Anna Cottongim, brother in-law Randy Zehring and numerous nieces and nephews.  Funeral services will be held Saturday, February 4, 2017 at 2:00 PM at the Arpp & Root Funeral Home, 29 N Main St. Germantown with Pastor Tim Rech officiating, burial immediately following at Germantown Union Cemetery.  The family will receive friends on Friday, February 3 from 5:00-8:00PM.


To order memorial trees or send flowers to the family in memory of James Cottongim, please visit our flower store.