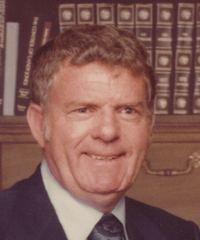 Harold Johnson, age 85 of Middletown, passed away Thursday August 15, 2013 at his residence. Harold was born in Berea, KY. the son of the late Neal and Randa (Wise) Johnson. He was a sub contractor and commercial roofer in the Middletown and Dayton area until his retirement. He was a member of the Germantown F.&A.M, Scottish Rite Valley of Dayton, the Antioch Temple and the Germantown I.O.O.F.
In addition to his parents, he was preceded in death by sons Harold David Johnson, Jack Johnson and 6 brothers. He is survived by his wife Sarah (Long) Johnson, son Daniel (Joan) Johnson of Miamisburg and daughters Andie (John) Kellis of VA. and Angie (Alex) Lawson of Canada, sisters Doris (Frank) Turpin of KY.,  Bonnie Morton of TX., 11 grandchildren, 6 great grandchildren and 1 great great grandson.
Graveside services will be held 11:30 a.m. Tuesday August 20, 2013 at the Springboro Cemetery. The family suggests if desired memorial contributions may be made to Hospice Care of Middletown, 3909 Central Ave., Middletown, Ohio 45044.  On line condolences can be sent to the family at  www.arpprootfh.com. Arrangements entrusted to Arpp & Root Funeral Home Germantown

To order memorial trees or send flowers to the family in memory of Harold Johnson, please visit our flower store.