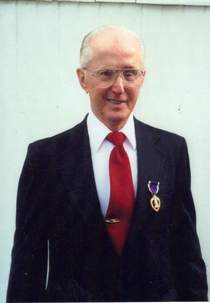 Eby, Harold W., age 101 of Germantown passed away on December 1, 2015 at Dayton VA Hospice.  Harold was born to the late Vernon and Bertha (Lentz) Eby in Trotwood, OH.  Along with his parents, he was preceded in death by his wife Marguerite, son Terry, grandson Daniel Eby, 1 brother, and 2 sisters.  He is survived by his sons Tom (Marie) Eby and Ted Eby, grandchildren Amy Eby and Jeanne Dellinger, great-grandson BJ Stidham, and brother James (Frieda) Eby.  He served in the US Army during WWII, 102nd Infantry Division in the European Theater and was a Purple Heart recipient.  He was a member of St. Johns United Church of Christ.  Funeral Services will be held Saturday December 5, 2015, 11:00am at the Arpp & Root Funeral Home, 29 N. Main St.  Germantown with Pastor Rich Luh officiating.  Interment at Ellerton Cemetery.  The family will receive friends the same day of the service beginning at 9:30am.  In lieu of flowers, the family requests donations be made to the Dayton VA Hospice (Victory Ridge), 4100 W. Third St.  Dayton, OH  45428.  Online condolences can be left at www.arpprootfh.com.

To order memorial trees or send flowers to the family in memory of Harold Eby, please visit our flower store.