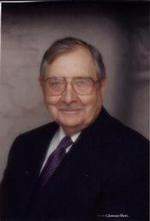 Peters, Edwin E. (Ed), age 95, of Miamisburg passed away Sunday July 24, 2011 at Sycamore Hospital. Ed was born February 19, 1916 in New Weston, OH to the late Ernest and Bessie (Mills) Peters. He served in the U.S. Army and was a WWII veteran. He retired from General Motors where he worked as a job setter. Ed was preceded in death by his wife Onda Peters, a brother Carrol Peters and two sisters Mildred Schmidt and Janice Stover. He is survived by his daughter Janet (Rick) Carter of Farmersville; grandson Jeff (Kari) Carter of Farmersville; granddaughter Kelly Carter of Miamisburg; great granddaughter Cameron Carter and great grandson Carter Lane. Funeral services will be held Thursday July 28th at 11:00 a.m. at Arpp and Root Funeral Home in Germantown with Brother Earl Wilcher officiating. Burial at Holp cemetery in Farmersville. The family will receive friends on Wednesday July 27th from 6:00-8:00 p.m. at the funeral home. Online condolences may be sent to the family at www.arpprootfh.com.

To order memorial trees or send flowers to the family in memory of Edwin Peters, please visit our flower store.