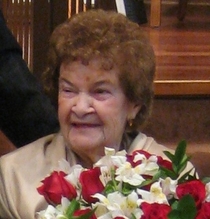 Mrs. Brads often shared her testimony of how she accepted Jesus as her Lord and Savior at the age of 13.  So we rest and rejoice in the assurance of her home in heaven.  What a reunion there must have been in Heaven with family, friends and loved ones.  While we knew her as a loving and caring mother and grandmother, she was most known in her community as the “preacher's wife” and she was the epitome of what that role entailed.  Many a young preachers' wives have shared that they modeled their actions by those of hers.  Mrs. Brads' love and care was extended to others as she provided child care in her home for close to 40 years.  The lives of nearly 2000 children and their parents were exposed to her special love and care and every one of them were told about her Friend and Savior, Jesus.

She is survived by her sister, Mrs. Willie Ward (Aunt Diddie) of Goshen, Virginia; five children, two daughters, Judy Higgans Brads of North Carolina and Zola R. Fisk of Hamilton, Ohio; three sons, Charles M., (Diane Burns) Brads of Virginia, Paul David (Diane Mohler) Brads of Georgia and Alvah Stephen (Vivian) Brads of North Carolina, eight grandchildren and sixteen great grandchildren.  The family wishes to express their heartfelt appreciation to Dr. Noel Watson and his wonderful staff for their loving care of our mother for many many years.  Thank you to the nurses and aides of Kettering Home Health Network and to the angels on earth from Hospice of Dayton for their kind considerate care of our precious mother and grandmother.  In addition special gratitude is extended to Carpenter’s House Baptist Church of Germantown, Ohio for all the special love and accommodations that have been given to our mother and to us, her family, after her passing.  Visitation will be at Arpp and Root Funeral Home, 29 North Main Street, Germantown, Ohio 45327, Tuesday, February 17, 2015, from 5-7 P.M.  Additional visitation will be held on Wednesday, February 18, 2015 at 10:00 A.M. prior to the funeral service at 11:00 A.M. at Grace Baptist-Middletown, 3023 North Union Road, Franklin, Ohio 45005, Dr. Max Fernandez, Pastor and Dr. Roger Green officiating.  A graveside service will follow at Germantown Memorial Cemetery, Germantown, Ohio.


To order memorial trees or send flowers to the family in memory of Della Brads, please visit our flower store.