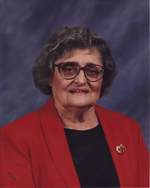 Betty Lou Powell, 83, formerly of Germantown, Ohio,  died February 26, 2012, at Vancrest Care Center in Eaton, Ohio.
Betty was the daughter of the late Stanley and Helen Powell.  She was a 1946 graduate of West Alexandria High School and a received a Master’s Degree from  Anderson College in Indiana. Betty worked for many years as a school teacher both in Ohio and Texas where she taught Spanish, French, and English. Her interests included family, crocheting, and reading.  She was an avid Star Trek fan and writer and had many published poems.  She was a member of the First Church of God in Germantown, Ohio.  She devoted her time and energy as a caregiver to many elderly people. In addition to her parents Betty was preceded in death by brother Robert S. Powell. Survived by brothers Norman (Sharon) Powell of Eaton, Thomas (Patricia) Powell of West Alexandria, John (Sis) Powell of Lewisburg, James (Becky) Powell of West Manchester, Richard Powell of New Lebanon, William (JoAnn) Powell of Lewisburg, Gerald Powell of Massey, Canada, sister in law Vicki Powell, of Farmersville and uncle Luther Powell of Summerville.  Betty had 15 nieces and nephews and numerous great nieces and nephews. Funeral service will be held 10:30 a.m. Wednesday at the First Church of God 760 Farmersville Pike Germantown, Ohio. Pastor Steve Carney officiating. Burial Sugar Grove Cemetery, West Alexandria. The family will receive friends 5-8 p.m.  Tuesday at the Arpp & Root Funeral Home Germantown.  In leu of flowers, please make donations to The Hospice of Dayton and/or Alzheimer’s Association. Online Condolences may be sent to the family at www.arpprootfh.com.

To order memorial trees or send flowers to the family in memory of Betty Powell, please visit our flower store.