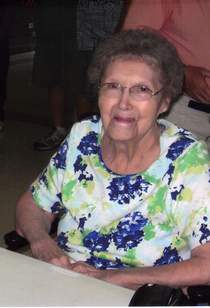 Thompson, Anna May (Karacia), age 89 of Germantown, OH passed away peacefully on Saturday, April 30, 2016 surrounded by her children.  Anna May was born to the late Joseph and Anna (Pavolic) Karacia and enjoyed sewing and word search puzzles.  She also loved collecting bells, cruets, creamer and sugar sets.  Her grandchildren often called her Grandma “T” and said she had the softest skin and hands.  Anna was a devoted and loving wife, mother, sister, aunt, friend and caregiver to her late husband Boyd.  She was a hard worker and at age 70 retired from Payne Fabrics after 30 years.  Along with her parents, she was preceded in death by her beloved husband of 40 years, Boyd Thompson; 2 sisters Mary Reynolds and Sylvia Bunn, 5 brothers Michael, Aleck, Robert, John, and Frank Karacia; and her grandson Stephen Foust.  She is survived by her devoted children Shirley (Walter) Foust, George (Pat) Frymyer, and Katherine Thompson (Roger Cox); grandchildren LeeAnn (John) Kelly and Todd Frymyer (Alison Garippo); Great-Grandchildren Josh Kelly (Emily Snider), Jen (Mike) Isbell, Joe, Jill and Jessie Kelly; Great-Great-Grandchildren Lily Frymyer, Hunter, Charlee, and Layla Isbell; sister-in-law and niece Anna Louise (Thompson) Fletcher and Gail (Paul) Cousineau; and numerous loving nieces and nephews.  The family wishes to thank Hospice of Dayton for all of their care and comfort to Anna and her family.  The family will receive friends on Wednesday, May 4, 2016 from 12-1 PM at Arpp & Root Funeral Home, 29 N. Main St.  Germantown, OH.  At 1:00 there will be a short prayer, immediately followed by a graveside service at Fairview Cemetery in Gratis, OH.  In lieu of flowers, donations may be made to Hospice of Dayton, 324 Wilmington Ave.  Dayton, OH 45420.

To order memorial trees or send flowers to the family in memory of Anna Thompson, please visit our flower store.