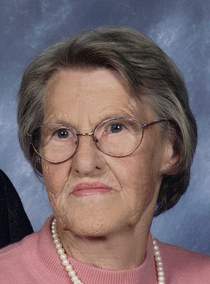 Ada  O. Foust,  Age 86, of New Lebanon, Ohio passed away Saturday, April 18, 2015 at Hospice of Dayton. Ada was born on October 17, 1928 in Speedwell Tennessee, the daughter of the late Jesse L. and Harriett E. [Leach] Russell. In addition to her parents, she was preceded in death by 1 sister; Edith Bollinger and 3 brothers; Audey, Walter, and William Russell, all of Tennessee. She is survived by her husband of 61 years, Carl J. Foust; son; Ronald J. Foust, both of New Lebanon; daughter and her husband; Sandra A. [Patrick] Bir of Dayton; 2 grandchildren; Mellissa A. Bir, and Christopher P. Bir; 1 great granddaughter; Mariah C. Bir; all of Dayton. She is also survived by 1 brother; Claude Russell of Speedwell TN; and 2 sisters; Carrie Craig of Clinton, TN. and Ethel Walker of Lafollette, TN. Ada was a member of the First Baptist Church of Germantown for over 54 years; where she faithfully served the Lord. She was a kind and gentle soul; and a loving and caring wife and mother. Ada was an avid gardener; who often said she wanted her flowers while she was living. She will be sorely missed; and fondly remembered by family and friends. The family wishes to express their appreciation to the nurses and doctors of both Kettering Memorial Hospital; and Hospice of Dayton for their considerate and compassionate care of our precious wife and mother. Visitation will be held on Friday, April 24, 2015 at 12:00 pm. at the Arpp & Root Funeral Home; Germantown, Ohio. Funeral services will follow at 1:30 pm. Friday, April 24, 2015. Pastor Ted Ricci officiating. A graveside service will follow at Germantown Union Cemetery, Germantown, Ohio. In lieu of flowers; the family requests donations be made to the First Baptist Church of Germantown; or Hospice of Dayton in her name. Online condolences may be sent to the family at www.arpprootfh.com

To order memorial trees or send flowers to the family in memory of Ada Foust, please visit our flower store.